People who are interested and motivated are what make a business work. But it can seem impossible to find a personal development tool that works well with the different strengths and weaknesses of everyone on your team.

People on your teams have different personalities, habits, and ways of talking to each other. Knowing how to interact with each of them in a way that works best for their personalities can increase their engagement at work and make them more productive as a whole.

DISC stands for “Dominance, Influence, Steadiness, and Compliance,” which are four basic personality traits. According to the science behind DISC Behavioral Styles, everyone has these four basic ways of acting, but to different degrees.

You should think about DISC if you want to learn more about development, improve communication, and make learning more useful. DISC is the best tool used all over the world to help people reach their full potential, make their workplaces more efficient, and build high-performing teams.

To learn how OKRs can help take your team to the next level, enroll in our OKR Mastery course and earn a 35% commission when you invite others to join this course!

What are DISC Personality Types?

People have a mix of each of the four personality traits in the DISC style. But almost everyone strongly identifies with one or sometimes two of them.

DISC can help you understand how you naturally think and behave. This shows how you are different from most people and how you are the same as some people. DISC shows you what your best qualities are and what might be holding you back.

Employers use the information from DISC to find out how well their employees can communicate with each other and predict how they will act at work, no matter what their background is or how much they know. 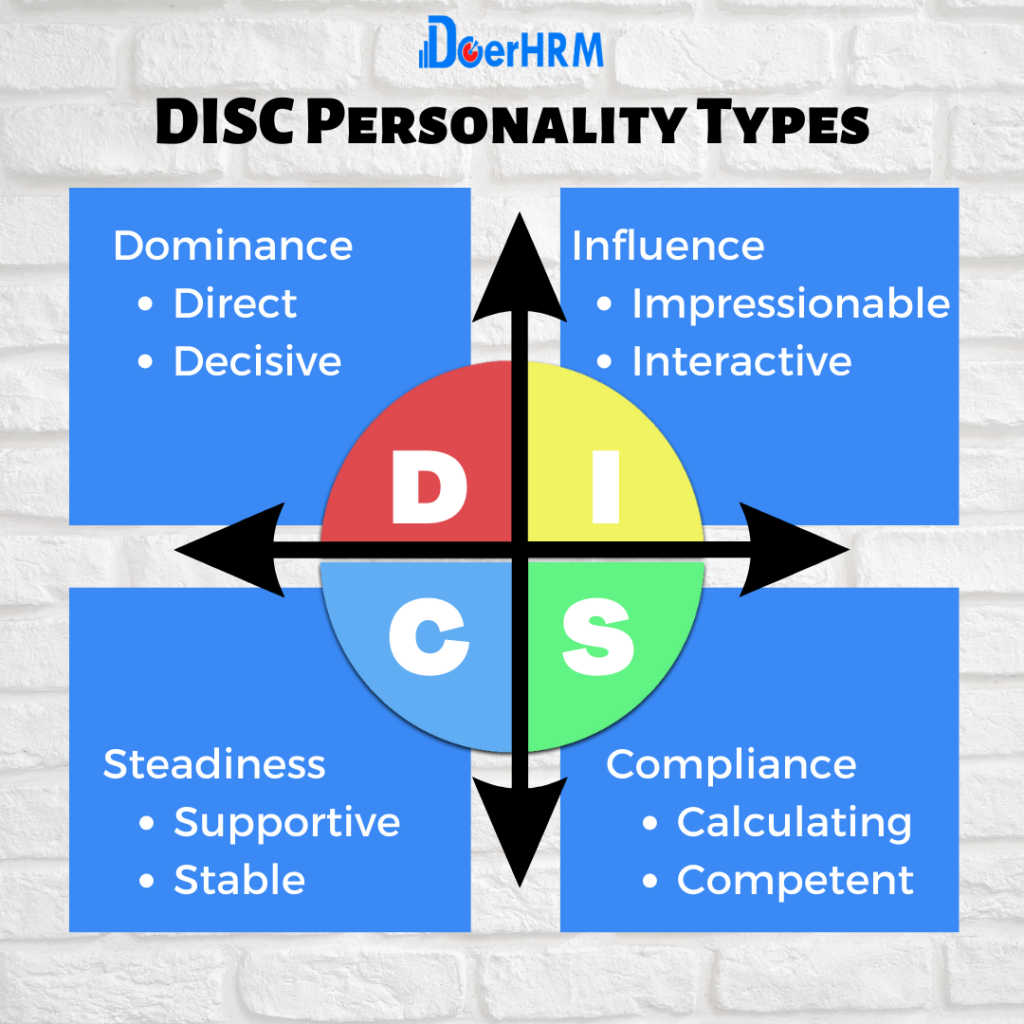 The Dominant (D) style of the DISC behavioural model is task-focused. This trait has to do with power, control, and being assertive. People who are dominant tend to be direct, quick, and strong-willed.

Some traits of the Dominance personality that can be seen are:

Some of these Dominance traits can help a person do well, as you can see. Still, some people may cause problems in a group, especially if their ideas are different from those of someone else on the team.

The Influence (I) style likes to show how excited they are, take action, and get their teammates to work together. The I style tends to get people to agree with them by being enthusiastic and friendly. They get good results by making alliances and getting the whole team involved in their work.

Some traits of the Influence personality that can be seen are:

As you can see, people in the Influence segment have a lot of good qualities. However, some of their personality traits can get in the way of people who want to take their work more seriously and objectively.

People who sit in the Steadiness (S) style are usually more patient and calm than others. This trait has to do with being persistent, having willpower, and being patient. People who are steady tend to be kind, patient, and willing to help. Some of the most helpful but quietest people in the Group, they are people-focused but not as outgoing as the Influence style.

Some traits of the Steadiness personality that can be seen are:

People who fit into the category of Steadiness are not likely to cause problems on a team. Even though the S style seems to be very sure of their systematic way of doing things, they often have trouble speaking up or handling signs of conflict.

People in the Compliance (C) segment are the most reserved and analytical of the four styles. They do tasks carefully and often try to get them right the first time. Like Steadiness style, they tend to be more quiet and less likely to join in on group conversations. But, unlike the S style, they don’t try to avoid conflict and can even be too critical at times.

Some traits of the Compliance personality that can be seen are:

Most people who sit in the Compliance segment are good at getting things done and can work well on their own. But it can be hard for them to work with other people without being too critical or needing to take charge.

Learn About Your Team and Use Them to Your Advantage

Even though most business leaders know that people are different, both from each other and from themselves, this can sometimes be seen as a bad thing. People sometimes think that “different” is bad or wrong.

But when you realise that people’s personalities and ways of acting are directly related to their preferences for work environments, communication styles, types of tasks or roles within a company, and more, the “differences” between your employees can help your business grow and stay ahead of the curve.

What does this mean for your business? It means that the DISC personality test gives you access to a lot of information that you can use to directly improve employee performance, morale, and productivity, improve communication and team productivity at work, and so much more.

During the hiring process, you can use the DISC report to clearly see which candidate is right for which role. This will help you make the best decision and avoid problems in the future.

Why Strategic Plans For Employee Development Are Important

How To Put A Strategy Into Action Using KPIs

Key performance indicators (KPIs) have become commonplace in large and medium-sized companies worldwide. However, despite the widespread use of KPIs, many companies still have not

How To Use A SWOT Analysis For Strategy Execution

Historically, corporate planning has always been difficult. Many organizations have failed at trying to get everyone on the same page and agree to the details

Best Practices For The Execution Of Strategies And OKRs

Goal-setting, objectives, key results, strategy; all these words fly around the business world today, and are probably mentioned in every business meeting you have. But

A great strategy or innovative product can put you in the spotlight for a moment, but you won’t last there if you don’t have a

What CEOs Can Learn from Tesla’s Master Plan

Elon Musk published The Tesla Motors Master Plan in 2006 as a white paper. As detailed in the first strategy document, Tesla intended to produce

Get a free, full-feature trial of
DoerHRM OKR Software for 14 days